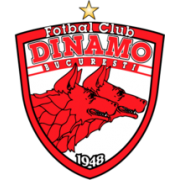 Fotbal Club Dinamo București (Romanian pronunciation: [diˈnamo bukuˈreʃtʲ], commonly known as Dinamo) is a Romanian professional football club based in Bucharest. Dinamo is one of the two most successful football teams in Romania, having won 18 Romanian Liga I titles, 13 Romanian Cups and 2 Romanian Supercups. They became the second Romanian team to reach the European Champions' Cup semifinals in 1983–84.
Founded in 1948, Dinamo has spent its entire history in Liga I, the top league of Romanian football.
The team's traditional home colours are white and red. The current crest is a modified version of the one adopted in the 1998. Dinamo Bucharest's home ground is the 15,032-seater Dinamo Stadium in Bucharest's city centre, where it has played since 1951.
The club's biggest rivals are Steaua București, and matches between the two teams are commonly referred to as "The Eternal Derby".